Over the last several years, a constant source of inspiration for me has been the quiet creative output of Colin Kenniff. His photographs, words and music. You can’t buy these things in a store. They have only been available on blogs and other online sources like flickr, and often just for a short period of time before being taken down.

I have tried to encourage Colin on several occasions to release some kind of album, as I firmly believe that more people out there would love what he does just as much as I do. Sometimes I even received replies which seemed promising. And maybe someday there will be a ‘proper’ collection of his work available. But after several attempts at convincing him I began to realize that maybe this simply wasn’t his way.

And perhaps that’s why I was so drawn to his work in the first place. While most artists seem to be always yearning for a larger audience and wider recognition, Colin seems content sharing his creations with the select few who happen to stumble upon them. The exact opposite of making a huge advertisement campaign and throwing art in everyone’s faces.

I must also admit that I’ve always felt myself overly focused on the end result. Yearning to hold the finished CD in my hand and calling it complete. That’s not to say I don’t enjoy the process of creating things. But I think sometimes I rush through things in order to get to the finish line a little faster. So in addition to being so enamored with Colin’s work itself, I have also been in awe of his approach, what comes across to me as an infinitely wise kind of patience.

This song was made for Colin. In the first section I describe my dedication to his work and life on this planet:

How many musics have you made?
Even more than the hundreds I’ve played
And I think that it’s a treasure of gold
Filling my heart as an empty mold

The text in the end of this song comes directly from a comment exchange Colin and I once had on his flickr page. He posted the photo above and this tiny conversation followed:

Me:
I hope the little people inside survived?
Colin:
They did. It was a small miracle.

Where can I find Colin on Flickr? I tried but failed. Does he have a pseudo name? I can identify with Colin. I post pictures and take them down. I write words and delete them. It would be nice to witness his work and even watch it disappear. Maybe, …I wouldn’t feel so alone.

i’m actually not sure if colin still has a page. i haven’t been on flickr for a while now. best wishes…

This song has started to become a favorite from the album. A really beautiful composition. Love the change of pace as it picks up, reminds me of horses with no riders galloping through open fields for some reason.

Maybe this is how Colin feels : 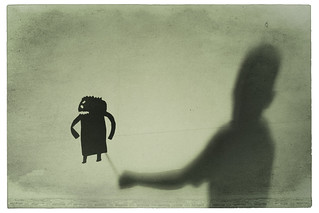 peter, i´m so happy because you wanted to show this album in the world wide web. congratulations!!!!!!!!!

As if I am not captured by the story and music alone, I scroll down only to discover this is about Keith Kenniff’s brother. Wow. I listened to Colin’s song that Keith posted and am completely moved. I was not aware he had a brother so talented. All of this is fascinating and you are an inspiration, Peter.

I’m glad you wrote a song about Colin. Colin is great.

I have been waiting for this song to enter my universe for ten months. While your Colin, your meaning , and your inspiration, differ from my own, they are ultimately the same: Love and Gratitude for a fleeting muse. Sheer beauty. Thank you Peter.

A mailbox shaped house came crashing to the ground. The little people inside it never made a sound with noone around the pieces never could be found. what were they doing just before? when heard, its communication started not but ceased forever more. Lichen touched roof and white painted windows stood outside blue faded walls Leaf covered mud over green colored grass. Nothing built by human hands is meant to last… Forever

Do you listen to your music once it is completed and enjoy it as a piece or as your stamp upon music. Or do you draw more ideas from it. Do you criticize it? Sorry I suppose for the questions. This is a mastered side of music I have so very graciously fell over.

ha . . . i’m almost ashamed to say that i do listen to my music a lot once it’s finished. i tend to listen to the things i’m working on obsessively, over and over again, getting ideas for what to do next or just trying to accept it as something finished… and then at one point it stops doing anything for me, and i move on to something else.

i just heard Colin : beautiful as usual… Love the conversation on the flickr page, very amusing!

You are a magician.

Mmmm, very in love with this all.

Just heard your music on an All Songs Considered podcast. I really like the song I heard, ‘Colin’ and intend to check out more of your music. The beauty of the internet is I live in Bangalore, India and would never have heard of your music otherwise. I leave you with a song from a British band I love, called Cornershop. The lyrics are entirely in Punjabi, an Indian language I understand, but I love the song’s melody, so here you are.

This is a beautiful song. The whole album and this website are really fascinating…thank you!

Please tell me this is on vinyl…

I could try and put it in dozens of different ways- with different metaphors or praises; but what you’ve done, with this work of yours, is to make me feel safer. It’s incredibly rare, but I feel that Life will be safe in your hands. You are a rare breed indeed.

This song builds to absolute perfection! I heard it on All Songs Considered. I can’t wait to listen to more.

OK that.s it, I’m now hooked and I just ordered the album.
Please do a UK tour .

Your story sounds like something I’ve felt a lot. Many of my friends make amazing music, but never release it, or just on a ridiculously low scale. It’s kind of frustrating, but then again, beautiful too, like you said.

Hi Peter!
Greetings from Spain!
I discovered by chance your music from a public radio program here.
It was worth getting up at 6am and finding your tunes there!
Keep up!

My name is Liam. I am a fan of yours from South Korea. I just happened to catch your music 2 days ago and I am loving it. This song is the best song I have heard so far this year and it’s my favorite from this album. It’s got a bit of irish oomph that just works with me (I am sure whether it REALLY is irish but it sound like that for me in my ears).

Anyway thank you for sharing your project with the world. I already purchased all of your songs that i could find in Korean music website. I hope someday we can see them in CDs here in Korea.

Thanks! Keep up the good work!

As I listen, see, and feel your album, I am moved beyond words. Your creativity has touched me, Peter. Thank you so much for sharing this project with us.
Listening to “Colin” for the first time, when you began to sing the words of your conversation with him, I was singing along with the melody pitch for pitch.. knowing exactly where your voice was going (before it went there). You created a melody that was the same as mine for the last part of this song! What an experience! Singing along with a song that I’ve never heard before. Complete and utter bliss!
Love,
Andrew

P.S. In case you are interested. After listening to your album, I was inspired to write a song. It was a frigid day in Canton, OH and I had been looking forward to sunlight that day, but there was none to be found. So I ran home from the coffee shop I was listening to your music at and recorded this in garage band. Listen to it if you would like, it was inspired from your creativity.
http://andrewshearer.tumblr.com/post/18569008780/nomorecold

Love this one the most -

dear nils, this is a wonderful piece of music and i cant stop listening to this song! thanks for making me happy! :0) i hope to see you on stage again soon. best wishes! danke, norman

oh man, thanks a lot peter in the first place! (its too early for me to leave a comment). sorry!

Lovely song ……. Get Colin to publish his stuff

Thank you for your wonderful song about my brother Peter. Your album is wonderful.

Here is a rare released track by him.

love this song. thanks for posting keith!

this is an absolutely lovely song, and i think this guy Colin is a great inspiration, in world where an awful lot of people want to get as many friends as possible on facebook, and to have everyone folliwing them on twitter…

p.s. i love this whole album/website concept! , and i love you Peter Broderick!