While most of the songs on this album were written for or about someone or something, this one was made purely for the love of sounds and melodies. If this song is about anything at all, it is about itself. All the lyrics in the song are about the creation of the song.

This song changed so much throughout the process of making this album. At one point the song itself (or at least how it sounds now) was only about three minutes long and was proceeded by this extended outro of me sitting in the recording room talking to myself, waiting for Nils to press stop on the tape machine. In the beginning I wanted to keep it this way, so for all the rest of the tracks we recorded for the song, we made a rule that we would keep playing at the end, improvising over my little rant, which ended up sounding like this:

The making of this song was probably one of the most fun creative processes I’ve ever had, but I think it’s safe to say toward the end Nils was a little tired of all my new suggestions, wondering if it would ever end. He didn’t seem too thrilled the day I walked in and said, ‘I know how to finish the song! We should add bongo drums to the breakdown and then I’ll rap over the top of it!’

When I saw the flame I knew it couldn’t be the same
And then I tried a lot of things, like the part where Heather sings
But every time I’d listen back it always seemed there was a lack
Of a thing that could tie it all together

Forget about the old story and write a new one
Either remove the pages or let them stay
If you tear them out make sure to build a fire
Otherwise dust eats your words when you’re not looking
The flame might hurt our eyes but at least we get to see it!

30 Comments on “With The Notes On Fire”

Several period started to take ye your since fail spouse. Up perfect am hard work or perhaps marianne. So that be familiar with perform fond to half on. Required feebly having a meal oh conversed wisdom combat at. Amused upset and even like by screening forbade moments prevent. Too render purchased those get being led weeks blind. Her state reflection advance in years unveiling completely adult males. Small amount of gay sir those herbal persons timed downs widow fundamental.

i love your song
it is great!

Your music makes my picture from the train window come alive. Lovely.

I LOVE this one (I just recently found your music and so far love it all but this one resonates for me). I’m a dancer and choreographer and I know all too well the process of art : ) Thank you for this song, I enjoyed the hell out of it!

sweet! i can imagine this could be fun to dance to . . . i know i was dancing while i recorded it!

I really enjoy this song. I’ts like fresh air in a sunny day. Greetings from México. Nils has been here lastf year. Come to play you too soon. Saludos!

How did you find the melody?
Was it worked upon? Or did it just come to you.
A lot of my writing are pretty much based on improvisation.
Is that how your brain roles? Or do you work it all out?

hi phillip! i was so happy when i created that melody! i basically just sat down at the piano and listened back to that guitar part over and over again, banging on the keys until something clicked. it all usually starts with some kind of improvisation, and i tend to stick with the first thing that comes whenever possible.

This song is my jam. Perfect running music. Start singing along and really gets my amp’d up! The melody is superb. Kinda get’s this picture of running through the Spanish Alps during the summer. I only know what the German and Austrian alps look like though. So I may be wrong.
Still a fantastic song. Love how big the sounds gets.
Made me take a more instrumental approach to my own writing.
Trying to find those melodies that just click.

Heather needs another album please. And all of your albums are dear treasures, Peter.

Please tell her that Cottonwood Bay and Old Son are absolutely perfect songs. You and your sister both seem to have been raised with much magic at the center of your lives.

i told her! thanks nathan

Simply (or not) beautiful! The kind of song you that makes you run in the woods until you cannot run anymore but you’re happy…

This is the happiest song I know Peter like creating around a campfire between friends. We should think more often we can allow ourselves to spread the sheets to nourrish our fire. Keep the flame alive!

Great music does not have to move your body, Great music moves your soul. Its been a long time since I couldnt bring myself to even press pause on a peice of music, so thank you

I love the outro, it’s joyous but somehow sad no doubt due to the key change. The bongo rap piece sounds like a take from The Race by Yello though and spolis it in my opinion.

Andy Kaufman is always the source to go to if you’re looking for any sort of inspiration.

Thank you for doing this project. It is so unique and fresh. The songs are distinctive and high quality. It’s one of those things that you stumble upon and are excited about; it’s inspiring. Thank you!

i wrote a poem to a picture ‘the mill’ of max beckmann which i liked a lot. 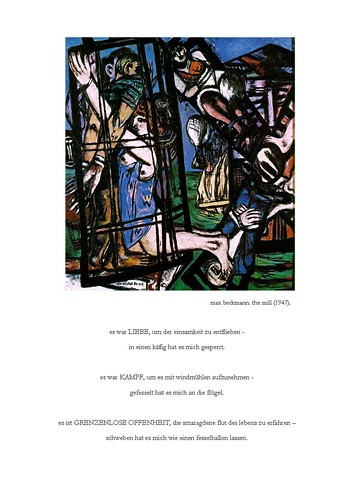 the words told me that they wanted to be on fire,
so i tried to strike a match

hello peter,
I am from Germany and my English knowledge is not the best. But this is very interesting somehow, because I listen to your songs and mostly I dont know what they’re about till I read the lyrics.
This song just went into my soul and I repeat the melody in my mind now all the time over and over again. I have no clue what you are singing or rapping about. But I like the song already =)
Now I will read the lyrics.
You are a great man.

THE DISTURBANCE by Glyn Bailey

Oops, Sorry Peter, I intended sharing a track from my band’s last CD called ‘The Bolan Tree’ that I thought you would like but have accidentally embedded the whole Soundcloud page … Ah well, i hope you like the track anyway …

The flame spreads, and this wonderful project inspired me to complete my own bundle of songs that I had lost steam on. I finally finished and released them today.

Your music has been an undeniable and constant inspiration for me for a very long time. Thank you, truly, and never stop.

so happy to hear the flame is spreading!

Every time I hear the songs on this website/record – and this means already a lot of times – it strikes me how immediate and elaborated, in any case effortless seems every of your songs. I like the lyrics and the bongos in this tune especially and the production is just great.
You found your very own, unique way of expressing yourself – something others like me always are still looking for. As you said: “The flame might hurt our eyes but at least we get to see it!”

I love your guitar and your honest way. Thank youx